What a Bunch of Schist

This post is a continuation of the our first day in Tasmania. After looking at some glacial features, we headed south to our destination labeled DAY 1 in Fig. 1B. Note that the outline of Tasmania is indicated by a heavy black line in Fig. 1B. As before, the reader is recommended to examine Fig. 1A for any details of the geology because it is a high-resolution image. 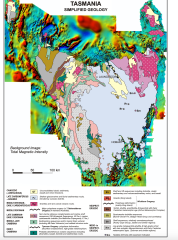 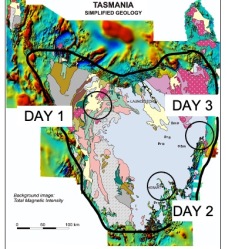 We will be driving southward, starting from the north coast (to the left in Fig. 2) to Cradle Mountain, about half-way to the right, in the Central Volcanic Complex (orange in Fig. 2). 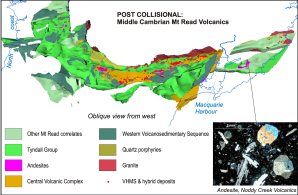 Once we entered the hills seen as we approached the coast, there were lots of low road cuts, which exposed intermediate volcanic and volcaniclastic rocks (Fig. 3).

The left image is a road cut about 10 feet high. The original bedding can be seen to be almost vertical, as indicated by the platy appearance. These rocks (whether volcanic or sedimentary) were originally laid down horizontal. It is difficult to date them because of subsequent burial and heating but they are thought to have been deposited (from radiometric dating) to between 1600 and 540 MY. This was when Tasmania was approaching a land mass to the (current) NE, the future Gondwana. Ocean crust was colliding with the land here at that time and creating volcanic rocks of a specific type.

The right photo of Fig. 3 shows a close up (the coin is 1/2 inch in diameter). Normally, a fresh break would be made on the rock to see the minerals and structures, but I didn’t do that. The photo does show fine structure, which could be either shallow or deeper water. There are a variety of coastal environments that would have collected fine sediment, including mud and silt. The location of Fig. 3 in the area is shown in Fig. 4A (below). 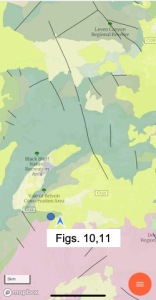 The background is from a phone app that shows an interactive geological map. The color labeled Fig. 3 and 5 has been identified from a lot of field work.

The rock is not as weathered in this location. The left image is an outcrop scale (~8 feet in height). It reveals more lighter colored sandy rock, presumably from a quartz-rich sediment. The darker color is from surface staining. The right image of Fig. 5 shows the coarser grain size compared to Fig. 3. We now have a reasonable answer to the question of where the dark and light cobbles we saw at Turners Beach in our last post (Fig. 7) originated. They were eroded by glacial action and transported along rivers to what was certainly not the coast at that time. The coastline would have been miles further offshore than today because of a much lower sealevel.

We crossed some volcanic rocks less than 60 MY old (yellow area in Fig. 4A), which tended to fill in lower areas, and entered another region of metamorphic rocks, these showing evidence of remineralization (Fig. 6). Here the rocks showed signs of chemical alteration and differential weathering.

The bedding plane surface shown in Fig. 6 reflects either muscovite or pyrite mineralization. Muscovite is a common metamorphic mineral that results from the burial and heating of mud whereas pyrite is injected by igneous rocks into the buried sedimentary rock. We drove a few miles further and discovered some vertical beds and an example of pyritization.

Figure 7 shows the original rock, tilted almost vertical (the heavy lines are bedding planes), with a sharp contact with a remineralized and weathered zone, which extends to the top of the exposure where soil is forming. This was probably a fault or plane of flow for hydrothermal liquids, which caused the deposition of pyrite on the left of the remineralized zone (Fig. 8).

The silvery (in the image) area is actually “fools gold,” or pyrite. The camera didn’t do a good job. This part of the exposure was covered with it. This is an indication of potential valuable minerals (e.g., gold, silver, copper) in the vicinity.

From Fig. 4A, we used our geologic map app to determine that these are Early Cambrian (509-485 MY) volcanic and volcaniclastic rocks, deposited when the collision with Gondwana beginning and metamorphosed and intruded when the collision was nearing completion, and granite-like rocks were being intruded. Mineral deposits are associate with these kinds of intrusions because they are more developed within the earth’s crust than basaltic rocks.

We continued until we came to Leven Canyon (Fig. 9), where more than 1000 feet of metamorphic rocks are exposed (see Fig. 4B for location). These are rocks originally deposited as more volcanic and sedimentary deposits at the same time (Early Cambrian) as the rocks from Figs. 6-8 (above). 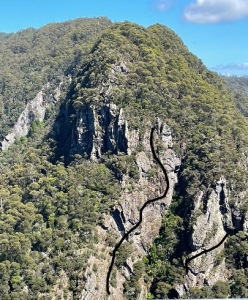 Figure 9 extends more than 1000 feet from the top to below the image. It is looking obliquely into the canyon, showing the opposing wall. The black lines indicate approximate bedding planes, which are folded and tilted. These rocks are from the Tyndall Group (the same a Figs. 6-8).

We completed our day’s journey near Cradle Mountain (Fig. 4C), where we found Cenozoic (<60 MY) lava forming a flat surface with low falls in creeks (Fig. 10).

A short walk up the creek, which formed the contact between the younger basalts and older (509-485 MY) sedimentary rocks, revealed the older rocks. Note the location in Fig. 4C, which shows the location of Fig. 11, where Fig. 10 was taken as well. 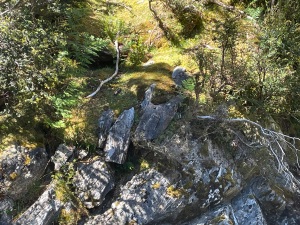 That was the end of Day One. There’s a lot more to come…