Geology of Australia: a Summary

This post is going to summarize everything I’ve learned about Australia from all my field trips so far. The first section, presents our last field site in the Australian Capital Territory, however, before summarizing the geology of the ACT, Queensland, Victoria, and Tasmania.

This is the last post from the ACT. Site 31 (see Fig. 1 for location) is located in the Botanical Garden, where a gully was excavated to create a rainforest. Despite the low rainfall in the area, it worked and a path leads through what appears to be an erosional gully from Queensland. 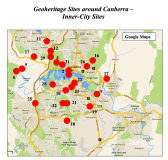 The fanglomerates exposed by the excavation haven’t been dated but are believed to be 2-3 million years old. This is too old for carbon-14 and too young for other radiometric techniques. Apparently, they don’t contain sufficient fossils to date either. These rounded cobbles of all sizes (Fig. 2) were deposited on an alluvial fan (hence the name) near steep mountains. 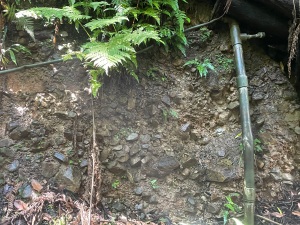 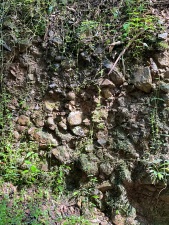 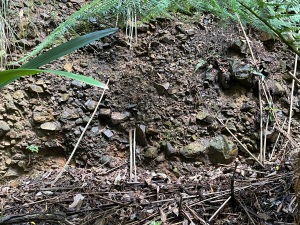 The cobbles range in size from ~one foot in diameter to less than an inch. Such a disparity is size results from short transport distance from the source, but the rounded shape of many of the cobbles suggests that transport in steep and rapidly flowing streams before deposition.

Most of the rocks we’ve seen in the ACT were deposited/intruded/extruded between 485 and 400 million years ago. The oldest rocks were originally deposited in an ocean trench near rapidly rising land with volcanoes erupting periodically, someplace like Japan today. Sedimentation accompanied by granite plutons pushing into older rocks as well as explosive volcanism continued throughout this interval. Sometime after ~420 Ma, many of the older rocks were buried and subsequently folded during a major compressional tectonic event. All of this occurred within a relatively small area, but over an immense time interval.

Whatever event created the mountains that must have existed ended and erosion began. Erosion of this immense mountain range continued for almost 400 million years, at which time the remnant mountains were still large enough to have active alluvial fans between 2-3 Ma.

We can fill in some of the gaps from the ACT by reviewing our trip to Brisbane.

First, Sand and mud were collecting in a shallow marine environment between 383-323 Ma, less than 600 miles NE of Canberra. These sediments were deeply buried, deformed, and slightly metamorphosed sometime after deposition. Volcanism was occurring as well.

Between 237 and 200 Ma, sand and mud were being deposited in a delta environment with enough organic matter collecting to form commercially viable coal beds.  During this same period, massive layers (>300 feet) of rhyolite were ejected from a shallow magma chamber, forming one of the largest calderas in the world. Erosion ensued until 23-16 Ma, when basalt flowed over the Brisbane area. (Note the change from felsic to basic volcanism during this geologically brief time span.)

Changes in sea level are currently leaving a record in beach sediments that may someday become rocks.

Sedimentary rocks were collecting in Tasmania (~600 miles to the south) between 1600 and 540 Ma. Volcanism was also occurring during this interval, recording a mountain building event not that different from that which occurred later. In fact, the dates are close enough (540 Ma here versus 485 Ma in Canberra) to justify calling this a continuous orogeny. Slightly later (500-470 Ma), a coastline was present in central Tasmania, and intermediate-to-felsic volcanic rocks were produced when a large granitic pluton was emplaced into older sedimentary rocks. More granite was emplaced between 420-360 Ma.

To get an idea of what might have been happening over such a long time (~1600-350 Ma), imagine all the islands east of Australia (preferably viewed on a globe) colliding with it, being swallowed beneath the much more massive land mass. Finally, picture Australia colliding with South America about 350 million years ago. It was that massive an event. Faults and folds are everywhere.

Between 252-201 Ma, Tasmania was collecting rocks in lakes and rivers, i.e., terrestrial sediments. There was also some alkali volcanism occurring. This period didn’t last long, however, being followed (201 and 145 Ma) by the emplacement of a huge basic intrusion close to the surface, between layers of sedimentary rock (aka laccolith).

Basalts flows spilled out of multiple volcanos around 60 Ma. Gravels and sandy sediment collected after ~2 Ma and the current surface is eroding as the land rebounds from removal of miles of sediments.

Melbourne was part of a massive delta system during the Ordovician period (~490-440 Ma), at the same time that so much was happening ~400 miles to the north, in the ACT. These rocks were later folded. Sedimentation shifted to sandy during the Silurian period (~440-416 Ma), probably due to a river changing course. Sometime after 440 Ma, regional compression changed from SE-NW to SW-NE, and increased in intensity.

During the Cretaceous period (145-65 Ma),  clastic marine sediments were collecting, as well as nonmarine. Sea level was oscillating. No radiometric dates are available.

The SE tip of Australia was covered by a massive volcanic field after 65 Ma. These flows reached the ocean and extended offshore. Some ash layer were created as well. Nonmarine sediments were also collecting during this period, but they weren’t buried deep enough to become hard.

Between 10 and 5 Ma, the Melbourne area changed from a shallow marine/deltaic environment to an arid land, with episodic sedimentation in streams. Basalt flows continued to pour onto the land, until 700 thousand years ago. During the last million years or so, the climate has dried and most rivers don’t reach the coast, leaving relict sands scattered over older rocks exposed at the coast. Cliffs are common features, partly because of sea level change, partly because of isostatic rebound.

That’s it so far. I’ll update the summary as the field data accumulate.