From the Cradle to the Top of the World

We headed west on C-132. The locations of photos will be indicated on a map using pins (red circle with a line extending downward).

We headed west in Cenozoic volcanics into Early Ordovician (500-470 MY) marine-to-nonmarine quartzose conglomerate-sandstone-siltstone sequences visible in low exposures along the road as seen in Fig. 2.

These rocks represent a smooth transition from nearshore to river and lake environments. Note the red color in outcrop (Fig. 3A). Note that the image is about 6 feet across.

Figure 3B shows the rock closer up, at which point irregular light-colored particles can be seen along with darker grains. The red color comes from oxidized iron in the cement. Figure 3C is as close as I can get with the iPhone camera. At this resolution, quartz and feldspar crystals can be seen. Most of them are rounded.

We drove a while across constantly changing Cenozoic volcanics and ~500 MY volcanics and volcaniclastic rocks, past several poorly visible volcanic craters that have become lakes. We eventually climbed out of the volcanic field into some felsic-to-intermediate volcanics (Fig. 4).

There were high ridges (Fig. 5A) supported by these rocks. 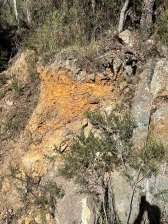 The outcrop in Fig. 5B is about 12 feet high. It shows fracturing and a solid appearance. However, near areas of probably hydrothermal alteration, this same rock weathers quickly to form an iron-rich soil (Fig. 5C). A major fault runs through the area where Fig. 5 was taken, as seen in Fig. 6.

The fault runs N-S next to Tullah. Note the numerous N-S faults running through Fig. 6. The photos in Fig. 5 were taken on A10 where it crosses a river south of Lake Mackintosh. The fault is expressed in cliffs on both sides of the river (Fig. 7).

This is mining country, as evidenced by the vertical mine lift shown in Fig. 7. There was no mine shaft under the original equipment on display however. The rock has changed significantly only a few miles further south (Fig. 8), even though it is still probably the Ordovician (~500 MY) volcaniclastic rocks we’ve been seeing before. Correlation is always a problem with field geology.

I can only speculate about Fig. 8A and say that this is either a contact, or near the contact of country rock (i.e. older sedimentary rock) with a granite (~500 MY) with porphyritic texture (Fig. 8). This is consistent with our path along the thin line of granite associated with the granite and quartz porphyry shown in the high-resolution 3D geologic model of this area (Fig. 9). You will have to zoom in to see the red areas. Also note the red squares that indicate mining areas. Granitic rocks are the primary source of hydrothermal fluids saturated with valuable elements like Cu, Au, and Ag, as well as a myriad of rare elements like niobium and titanium.

Another twenty miles through some very difficult terrane, finally following a twisting road through a break in the granite back of Tasmania, brought us to the other side of the mountain where there were no trees, but peaks that promised ore bodies, and wealth, ahead (Fig. 10). 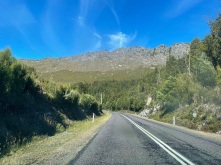 The rock becomes even more saturated with the white color as we approach Queenstown (See Fig. 6), which was a major copper mine in the 19th and 20th centuries. Here, a thin-bedded sand/siltstone is permeated and a discontinuity (diagonal contact, possibly a fault, with the irregular and fractured rock to lower right) may have been the route for transport of hydrothermal fluids (Fig. 10). 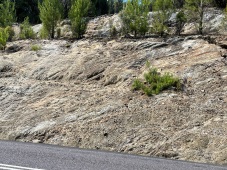 I’m not certain about the time of hydrothermal activity (ore emplacement) because the granite porphyry is identified as ~500 My (during collision with Gondwana) and could have produced many of the necessary fluids to saturate surrounding rocks. However, the granite to the east of the mineral belt is Devonian in age (420-360 MY), a difference of ~100 MY. The orogeny could easily have lasted that long, so we shouldn’t fret about it. There is no central clearing house for geological data and its interpretation.

We made it to Queenstown and climbed one of the steepest roads you’ll find anywhere; we climbed to the copper mines that had put Queenstown, Tasmania on the map (Fig. 11).

A lot of copper ore was removed from the area over a century but now it looked pretty dead, probably played out. These were mostly underground mines, which require high-grade ore to be cost effective.

We followed the long and winding road to the pass that allowed us to turn eastward. Along the way we saw mining tailings piles (Fig. 12A) across the valley. We also noticed some quartz-rich hydrothermal activity (Fig. 12B), but very limited in extent. This wasn’t like the copper porphyry mines of the Americas with low-grade deposits renowned for huge open-pits.We passed near a number of old mines with no signs of activity as we headed east from the ridge. We failed to take any photos, however. 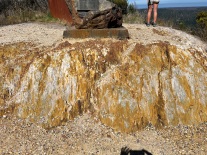 The road cut shown in Fig. 12C reveals the rich variety of color displayed by these remineralized rocks, as well as the beckoning omnipotence of the mountain tops, where the apparent bedding (from a distance) suggests a granitic magmatic body overlain by Paleozoic rocks infused with gold and silver. Alas, that wasn’t the case because there is no evidence of mines higher up the mountain than where these photos were taken.

Figure 12 D shows vertical lineations which suggest that this rock was subjected to a lot of shear after it had become relatively brittle. There are a lot of faults in the Queenstown region, as one would expect with the emplacement and later uplift of a massive granitic batholith (Fig. 13).

I would add that the striations seen in Fig. 12D are consistent with vertical shear along a fault running through the town of Queenstown.

Next time, we’ll go from the top of the world to the continental divide and (maybe) back to the sea…