From the Continental Divide to the East Coast: Mesozoic Rocks

Thus far on our Tasmanian field trip, we have seen glacial deposits and landforms, highly metamorphosed schists, remineralization and emplacement of granites, and deformed Proterozoic sedimentary rocks. This post is taking us from the continental divide to the southeast coast at Hobart. We’ll be encountering mostly Mesozoic rocks on this leg (Fig. 1). The extensive hydrothermal activity associated with volcanism and intrusion along the Dundas Trough didn’t occur in this part of proto-Tasmania.

These sedimentary rocks were deposited in both terrestrial and marine environments after mountain building and erosion during the previous 200 million years. Thus, we start out (see Fig. 1) in Triassic rocks of the Upper Parmeener Supergroup (252-201 MY), which includes sandstone, siltstone, and mudstone interbedded with coal and alkali basalt. The Triassic rocks in the NW part of our study area (along Hwy A10) are fine grained and exposed in borrow pits (Fig. 2).

Note the red color. Triassic sedimentary rocks throughout the world are red because they were deposited in oxygen-rich environments like rivers and lakes. They are thus called “red beds” colloquially. This was a time of high mountains and extensive land in Pangea and Gondwana that took a long time to erode.

After fifty million years, the Pangea supercontinent became unstable because of plate tectonics. When the crust thinned, mafic magma welled up and began to intrude into the thinned, terrestrial sedimentary rocks that had collected in the eastern part of proto-Tasmania. These weren’t deep rocks like gabbros, which have visible crystals in them, but were instead intruded near the surface and so formed small-grained rocks with some larger crystals that had already cooled. They are called dolerite.  Dolerite is hard but variable in composition and, because of its mineral assemblage, it weathers quickly.

We encountered dolerite (diabase to American geologists) as a low bluff, about 10 feet hight (Fig. 3). This is known as the Tasmanian Dolerite. It is Jurassic in age, having been intruded between 201 and 145 MY ago. It underlies much of eastern Tasmania. 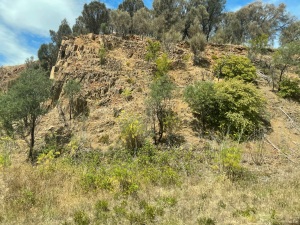 Note the blocky joint pattern that makes this look like a bedded sedimentary rock. Also, take notice of the red color, which has nothing to do with the red beds common to Triassic sedimentary rocks. The red comes from minerals like amphibole and augite, which have high concentrations of iron (Fe) and thus weather (i.e. rust) to form iron oxide.

Because of the variability in mineral composition and grain size, dolerite is often exposed only by road construction (Fig. 4). Thus, the same rock may form cliffs and mountains or low valleys. 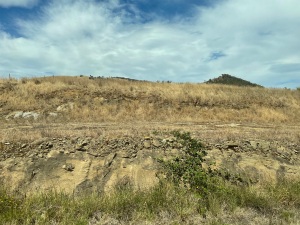 For example, high ridges and mountains are typically underlain by dolerite in this part of Tasmania (Fig. 5).

We didn’t see any other examples of the contact between the Parmeener sediments and the dolerite, not even on the tops of mountains. They were either one or the other. It’s important to recall that because the dolerite was injected between layers of rock, it was originally in contact with the older sediments on either the top or the bottom of a sill or dike or as part of a laccolith. Thus, when we see Triassic sediments dipping slightly to form a cliff at the top of a hill (Fig. 6), we can’t be sure what’s beneath the resistant sandstone. However, the geologic map suggests that this is not sitting on top of Tasmanian Dolerite. 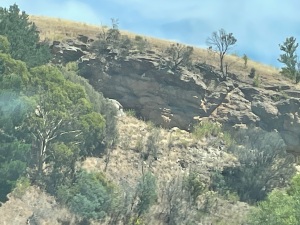 We will return to the Jurassic dolerite later. For now, let’s focus on the Triassic terrigenous sediments known as red beds. We didn’t see very many depositional sedimentary structures in the highly deformed rocks encountered so far on our field trip. It’s a little easier with these rocks, however, because they haven’t been subjected to mountain building (i.e., heating and compression). The first thing we notice is the high variability within a narrow window of time (Fig. 7). 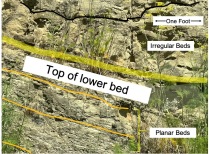 The broad yellow line in Fig. 7A demarcates planar beds in an earlier time from irregular layers at a later date, presumably not too long (maybe a couple of years or the next day). Note that the view is slightly oblique looking down on the upper surface of the lower beds. As a general rule (be careful but still…), the planar beds were created when sand and silt were dominantly carried along by suspended sediment transport. Or at least by very gentle currents. Irregular beds as in the upper part of Fig. 7A are often indicators of channels, which are eroded into sediments, creating an irregular quiltwork of bedding.

Another complicating factor in sedimentary depositional environments is the presence of organic matter, like dead leaves, animals, plants, etc, which collects where currents are weak. This of course occurs with mud but sometimes there is more organic matter than fine-grained clay minerals. The several-inches of organic matter in Fig. 7B (outlined by white lines) could have collected over a few hours or months. We cannot know. But these layers are common in clastic sediments where clay, silt and sand are simultaneously transported by streams and rivers. Note the lack of small-scale layering in the lower unit of Fig. 7B.

We know these sediments were deposited in a river because all of the cross-beds dip in generally the same direction (indicated by black lines in Fig. 7C). The white lines separate different sets of cross-beds. Changes in cross-bedding style indicate alterations in the flow or sediment or water depth, something like that. They don’t have to be significant. One of the sets highlighted in the figure could have been created in a few minutes and was miraculously (low probability) buried before a strong current destroyed it.

We can’t identify the slope-building rock below the sandstone in Fig. 6 without physically sampling it; however, we can have more confidence (not total, without a physical sample) when we see a dark, intrusive igneous rock like dolerite on top of a lighter rock (Fig. 8A).

Figure 8B shows the location of the photo superimposed on a geological map of the area. The greenish map color to the left represents the distribution of Tasmanian Dolerite whereas the purplish area to the upper-right is the Parmeener Supergroup. The contact between them is (supposedly) covered by colluvium. It is very possible that some original geological data that contributed to the map was collected before modern GPS navigation; i.e., a contact could be exposed but mislocated or lost when the field data were used to create the contoured map available to me. This is always a problem with small exposures like Fig. 8A.

The dolerite appears black and fractured in road cuts (Fig. 9A) with irregular weathering, but it sometimes must be reinforced as it physically weathers in place (Fig. 9B). We will see this ubiquitous rock again and again as we continue our field trip.

As we approached the coast, and Hobart, there were more road cuts that exposed poorly consolidated clastic sediments laying unconformably over the dolerite (Fig. 10).

This light-colored sediment is Quaternary (< 2.5 MY), eroded from all of the older rocks as the surface of Tasmania continued rising in isostatic uplift after deep burial of the rocks (and subsequent erosion of overburden), as well as the recent removal of ice. From exposures elsewhere, there is a soil profile of ~2 feet at the exposed ground surface of the dolerite, which consists of clays, sand, and boulders that haven’t broken down.

I’ll leave you with a photo of a mountain that remains stubbornly upright, reminding us that erosion is slow in Tasmania and 300 MY old rocks are relatively young…