This blog has been quiet for a while, not because I wasn’t traversing lands with a rich geological history; instead, my primary audience (off-road enthusiasts) had expressed no interest in geology. It turns out that they were typical Americans. Also, I’ve been busy writing novels and doing other literary actions, but now I’m writing this for myself. This is a record of my travels, with enough details to remind me of where I went and why it’s worth remembering.

This post reports on my first excursion since coming to Australia, a trip from Melbourne to Apollo Bay along the coastline of Bass Strait. Let’s get some perspective. 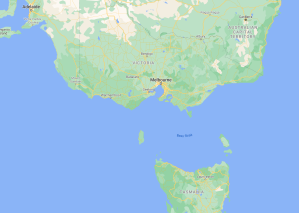 This is the SE tip of Australia. Melbourne is labeled, as is Tasmania and Bass Strait, which is 150 miles (~350 km) across. This post covers the very short distance from Melbourne to the tip of the continent to the SW. This was a day trip of only 200 km, which took about four hours because we stopped a lot.

Time for some geology. This trip is entirely located within the state of Victoria. The geologic map I’ll be using is  from 1982 but I don’t think it’s very out of date because the geology of Australia has not been explored in detail. Here’s a portion of the Victoria geologic map, with city names. It is a rectangle bounded by Melbourne on the NE and the NW corner of Bass Strait on the SW.

We drove our trusty Toyota Yaris along Highway A1 and turned south, reaching the coast at Torquay, due south of the western tip of Port Phillip Bay. This is a geologically interesting area at the southern edge of a Quaternary volcanic zone (orange background with v’s scattered in the geologic map), overlain on Tertiary (25-65 MYA) marine sediments (tan area in center of above figure).

The underlying sediments of Tertiary age formed ridges along the shoreline covered by sand from the eroding poorly cemented sandstones, as seen in these photos from Spring Creek Park in Torquay. 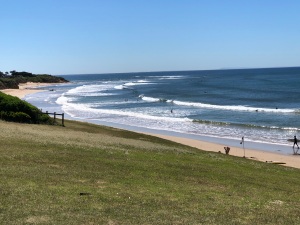 Note the yellowish, non-marine coloration of the sediments in the right photo. They erode rapidly and don’t form bluffs. The absolute (radiometric) age of these sediments was unknown at the time of this writing, but this exposure is the top of the stratigraphic column in this area; in other words, we will be going further back in time as we head westward.

Many faults have been inferred for the region, as shown in a hypothesized cross-section along the coast.

Note the field geologists’ interpretation of faults, shown by nearly vertical lines, in the middle of the section. The green colors represent sections of the earth’s upper crust dominated by non-marine sediments whereas the red are volcanics from about 29 MYA. The slivers of orange in the center are the sediments shown in the previous photos. They are riding on older Cretaceous (green) sediments with volcanics systematically exposed and subsequently eroded, because of uplift along faults (vertical lines).

Our trip westward along the coast took us into the older, Cretaceous, sediments (shown in green in the previous maps) beginning southwest of Anglesea, where the Great Ocean Road entered a National nature preserve that resembles Southern California near San Diego. This photo was taken near the edge of a bluff overlooking the coast, but it was closed because of recent cliff collapse. 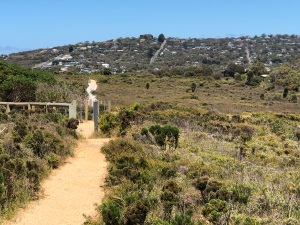 There are a number of rivers flowing to the coast from the inland uplands, but few of them reach their destination by late spring. The underlying rocky ridges form barriers that the river channels are forced to follow parallel to the coast for kilometers, forming structural lagoons with seasonal mixing with the ocean. The Anglesea River is a good example. The channel formed a lagoon that did not debouch into the ocean, although at high tide, during storms, there was inflow from the ocean. Here’s a look at this phenomenon. 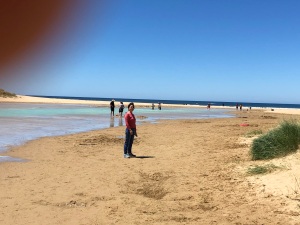 The first photo shows an anatomizing river, with side channels and bars, as if reaching its destination. The second shows the berm that prevents the river’s flow from reaching the ocean. The berm is overtopped only during storms from sea, or high-water flows from land. All of the river’s flow is absorbed into the dry sand in this arid environment. The river flow is not sediment laden, as shown in this photo of birds bathing in the shallow water.

We tasted the water, and it was slightly brackish, from seawater overtopping the berm. The rivers don’t carry a lot of sediment from the arid, low-relief landscape through which they run. Thus, the substantial wave energy impacting this coastline is not spent redistributing sediment from rivers and instead erodes the coastline. The next two images show how this process occurs.

The first photo looks west from the Anglesea River, where the rocks are weaker and form a less-steep bluff. They also reveal changes in dip, from almost horizontal to dipping seaward at more than 30 degrees to the right of the photo, near the river’s mouth. This may well have been a fault zone during a regional uplift event. The photo on the right is from east of the river, where the bluffs are much stronger. However, rubble piles at the base of the cliff indicate where collapse has occurred. This is the area where the previous image was taken from the top of the cliff.

Note the dark coloration of the lower half of the bluff face in the second photo above. This region experienced extensive volcanism about 30 million years ago, when Australia is hypothesized to have passed over an upper mantle “hot spot.” There is an extensive volcanic field north of this area and basalt blocks have been brought in to reduce coastal erosion; however, the dark layer in the photo is a layer of ash that has formed a weak volcanic rock called tuff. Here’s an example of this tuff in place over older sandy sediments. 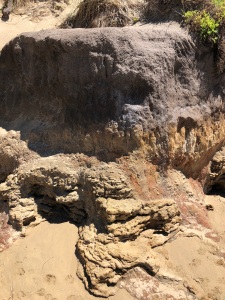 It is much less resistant to erosion by wave action than the blocks brought in for erosion control (seen in the left foreground of the previous photo). As the cliff retreats, the lower rock forms a table covered by a thin veneer of sand reworked continuously by waves. Slightly more resistant rock forms ledges that are exposed at low tide, as seen in this photo. 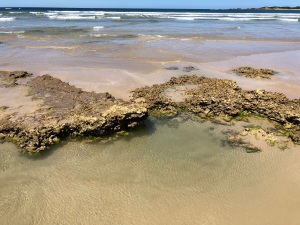 These exposed outcrops are visible along this entire section of coast, which is underlain by these same sandstone/conglomerate rocks. For example, here’s a photo taken at Aireys Inlet a few miles to the southwest. Note the tuff layer at the base of the pillar, seen clearly in the close-up photo below.

Because of the variable wave approach (from SW to SE), and heterogeneities in rock strength as well as structural factors such as faulting, many small pocket beaches have formed, many of which are the mouths of seasonal rivers and streams. Here is a good example.

Some of these bays are very large, as is this example from near Aireys Inlet.

The coast is lined with steep mountains eroded within Cretaceous, non nonmarine sedimentary rocks, forming very short streams that are prone to flash floods during heavy rain. The streams are so steep, that waterfalls can be found within a kilometer of the coast, such as Sheoak Fall, near Lorne, shown below. 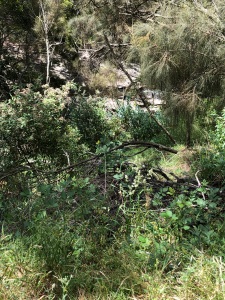 The second image shows flood debris in the foreground, more than fifty feet above the stream bed seen in the distance, deposited during a flash flood. Another feature of these coastal sediments are the presence of calcareous concretions, formed during burial and diagenesis, which dissolve out when exposed to slightly acid rainwater. They leave large voids like this.

There are even caves higher up the slopes. The entire drive to Apollo Bay was similar to what I’ve described above, sandy beaches overlaying rock shelves, with seasonal rivers debouching into the ocean. We finished the drive by following a two-lane road through Otway National Park and seeing a spectacular primordial forest that stood out in sharp contrast against the semiarid coastal environment.