Eventually, I could get my own vehicle. I started with a 1968 International Harvester Pickup with 4WD. It was okay but I upgraded to a new 1979 Ford F250 and started exploring the Basin and Range with more confidence. 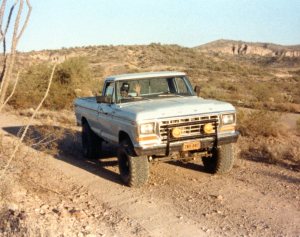 It was very easy to go offroad back then NW of Phx. This post gives a simple example of what this blog is about. 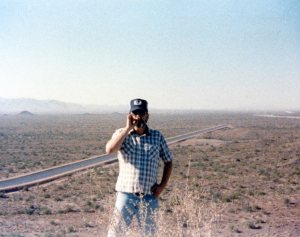 This image shows a friend standing on a ridge within the Hieroglyphic Mtns. southwest of Lake Pleasant, which is NW of Phx. In the background is the Central Arizona Project canal, which was constructed between 1973 and 1994. This area can be seen from satellite images, which weren’t publically available in 1981 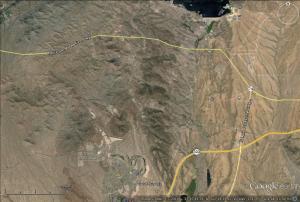 The CAP crosses this image along the south with a couple of bends near the residential area west of 303. L. Pleasant is the body of water to the north. The canal goes through tunnels where it crosses the Hieroglyphic Mts. In order to understand where the photo was taken, and what it shows, we can look at the bedrock plotted over the relief as seen below.

This geologic map is coarse and doesn’t show the necessary detail where we were. We can use the Roadside Geology book to see that the Hieroglyphic Mountains are Precambrian schist (metamorphic). They show up as small ranges within the sediment that fills the Phx Basin. 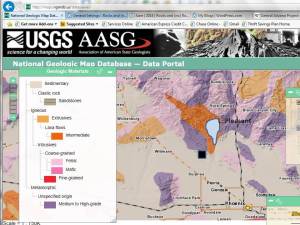 The approximate location of the photo is indicated by a black rectangle in this image. We were driving up a ridge constructed of Precambrian (pC) metamorphic (purple color to the W) rocks. The volcanic rocks (extrusive) on the map are the remnants of a faulted and eroded lava plateau from Mid-Tertiary (~30 Million) mountain building (orogeny) The pC rocks are schists (modified mud stone)that were uplifted from deep in the crust, not necessarily when the volcanics were produced. This image shows one of the many small ridges within the Hieroglyphic Mtns, and a dry river bed that drains the Central Highland terrane west of L. Pleasant. 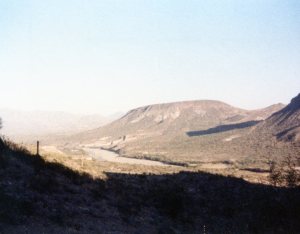 To summarize this easy day trip, we drove north along some recent colluvium (Holocene river/slope deposits) and climbed into a ridge of pC metamorphic rocks overlooking a depression (L. Pleasant) that probably formed along a fault (break in the Earth’s crust) during the Basin and Range event. To the west we had a nice view of one of the many ranges that were uplifted many miles to be seen by offroaders like us today.

The crux of this post is that >1 billion years ago, there was an ocean/coastline here and sediments were deposited in an environment we can only estimate. These were buried deep to be heated and crushed to form metamorphic rocks (schists). They waited…and then were uplifted. Eventually, volcanics were produced (like Hawaii today) and flowed out over them. Erosion from water wore all of these down to produce the Agua Fria river drainage system and finally, we (people) built a dam and dug a canal across it all.