I need to jump ahead here a little and put my travels into perspective (geological). The earth we mostly deal with consists of soils with different properties, like the hard, dry sandy soil we dug in for arrowheads in SW Colorado. This soil is the eventual product from weathering of rocks by wind and rain, ice, plants and animals, naturally occurring chemicals, and collisions between particles in moving water. These soils are very important to engineers and farmers because we use them for everything we do. However, they do not tell us about the distant past, e.g., the oldest soil in Africa is ~55 million years, but that is really unusual…more water means younger soils. In my travels, I am interested in soils but being a geologist, I really like old rocks!

A geologic map shows rocks as if the soil were all removed (i.e. outcrops), like removing the sand from the plaster fossils at a children’s museum. The map below thus shows sedimentary, igneous, and metamorphic rocks but no sand, gravel, etc. However, the transition from a soil to a rock is gradational and Pleistocene (~2.6 million to 11000 years) rocks are often poorly lithified, as found all over Florida beneath the surficial Holocene (<11000 years)sediments. Geologic maps present these at the top of their legends as Recent or Holocene sediments. Of course, there are brand new volcanics in Hawaii and Iceland, and at the sea floor, that are quite hard (lithified); we have to be flexible in dealing with natural materials. 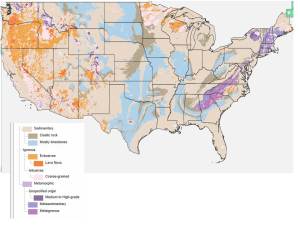 This geological map was produced by the USGS. It will be used in this blog to describe the areas I am discussing. There are many databases but this image shows an easy one to access for non-expert users (http://maps.ngmdb.us/dataviewer/).

The map above only shows the general distribution of rock type, which could be determined by anyone with no modern analytical methods, i.e., no dates are given. This is what I noticed while driving around (and clambering over) the western U.S., which in many ways resembles a geologic map in having rock exposures that closely follow the outcrop pattern on the map. As this page evolves, I will discuss ages more but mostly in general terms. These ideas are readily seen at the USGS dataviewer by switching between Bedrock to Surficial active layers on the Layers menu. A more complex but fun site by the US Government is found at: http://nationalmap.gov/