It’s the eve of our trip to Tasmania, so I wanted to post something. This makes me spend some time learning a little about where we’re going. I didn’t budget enough time for a place as rich geologically as Tasmania. I won’t be scratching the surface of this remarkable land, most of it unreachable by road.

This preview is based on a report by the Tasmania Geological Survey (Seymour et al., 2006). We start with a very good geologic map (Fig. 1b).

All the brilliant colors around the edges are magnetic intensity, probably measured by an aircraft. The legend summarizes most of the geology. Note that the large area of light blue is undifferentiated Paleozoic rocks. The places we’ll be staying are labelled in Fig. 1a because, having been modified in Powerpoint, it didn’t have the resolution necessary to read the legend.

Day 1 will be spent going from Proterozoic (~1.2 BY) in the NW, to Cambrian (~600-500 MY) at the first stop. This is going to cover a lot of geology, including a major mountain building episode in the Cambrian. We will spend the night at Cradle Mountain, in the middle of Dundas Trough (Fig. 2).

Figure 2 is looking obliquely from the west. The figure is oriented with the southern end (right side of Fig. 2) located at the NW coast (light blue line behind the “Day 1” label) in Fig. 1. It approximately follows the gray area in Fig. 1 and ends below the “Tasmania” label. I should have a lot to report from this leg of our journey.

Day 2 will take us across the heart of Tasmania (See Fig. 1a), beginning with metamorphosed Cambrian volcanic and sedimentary rocks, coinciding with the Tyennan Orogeny. These rocks were deposited in the Dundas Trough (Fig. 3) and intruded by a granitic batholith as mountain building progressed. 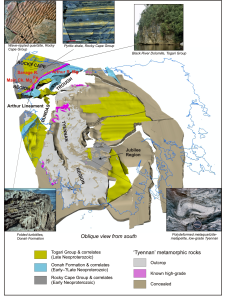 Figure 3 shows the geologic regions of Tasmania. Details of the Dundas Trough are not included because they are shown in the inset map (Fig. 2). Our second day will examine Late Cambrian to Devonian (~500-360 MY) sedimentary rocks deposited during final uplift and then erosion of the mountains that had been created during the Tyennan Orogeny during the Early to Middle Cambrian. We will hopefully find metamorphic rocks produced by deep burial during this event in the Jubilee region.

If we’re lucky, we may find evidence of major faulting during a Devonian compression event in SE Tasmania, but I’m not counting on it. What we will see are Late Carboniferous to Triassic (~300-220 MY) sedimentary rocks as we approach Hobart, our destination at the end of Day 2. There was a hiatus (aka erosion) of 60 MY before sediments begin to collect again. They haven’t been described in detail, so I’ll do my best.

However, there is one other geologic feature I hope we’re able to visit on Day 2. Figure 4 shows an image from Seymour et al. (2006) of a Jurassic (~180 MY) diabase (dolerite aka microgabbro) dike injected into “basement” granite in the background and sedimentary rocks in the foreground.

The photo was taken about 50 miles by road from Hobart, but there is no road to Cape Surville, so I’m not counting on it. Maybe there are other exposures…

Day 3 will take us to Coles Bay in the Eastern Tasmania Terrane (See Fig. 1a), where we will encounter more Ordovician to Devonian (~500-360 MY) sediments as well as quite a bit of faulting and intrusion of granitic rocks during the Carboniferous (~360-300 MY). Figure 5 shows the extent of igneous intrusion after Tasmania had solidly grounded against Gondwana. 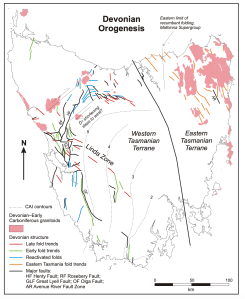 Throughout our adventure, we’ll see the sedimentary and igneous rocks that were created when Tasmania was torn away from the motherland (aka Gondwana).

It begins tomorrow evening when we board the ferry with our Toyota Yaris, ready to explore unknown lands…