Colorado’s Turbulent Past: The Road Follows the Gold

After passing thru the narrow canyon along Mill Creek (see previous post), we spent the night at Deer Lakes in Grand Mesa-Uncompahgre-Gunnison Natl Forest before ascending the lofty passes of the San Juan Mts. It stopped raining long enough to set up camp and then continued intermittently throughout the night and next day.

We continued deeper into the middle phase (30-26 mya) volcanic rocks and the outcrops became darker colored, reflecting the chemical evolution of the magma source for these ash layers and flows. This general area is indicated as site 5 on this photo.

We continued following wide gravel roads and paved highways until we reached Lake San Cristobal (elevation 9000 feet), where the resistant welded tuffs and flows produced by this volcanic phase formed peaks such as this one overlooking the lake.

The road followed money to Lake San Cristobal, where condos are everywhere and there is even a marina with small sailboats and row boats. The pavement and new gold (money) stopped at the inlet to the lake, where Upper Lake Fork Rd became a single lane gravel trail with intermittent wide spots to let opposing traffic by.

There was a lot of traffic heading back to the lake because the trail eventually encounters andesite flows that form ledges that a bulldozer could not level. Cars were not going to Cinnamon Pass, which is where we ended up.

Here is a photo that suggests why there is a road to Cinnamon Pass and beyond. I snapped this image while trying to avoid going over the side, but it shows a vein of what is probably pyrite (fool’s gold) in the cliff overlooking the Gunnison River.

Cinnamon Pass was the second highest elevation we reached during our trip (12640 feet). The peaks, which weren’t much higher, were composed of the alternating layers of ash and lava flows. These photos show the appearance of these rocks; note the small angular shards that litter the slopes. These result from dense joint patterns that indicate extreme brittle deformation, probably from faulting that followed volcanism continually. 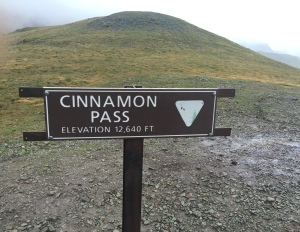 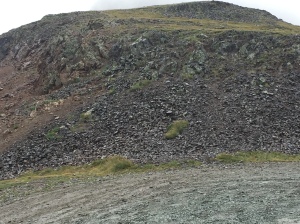 The headwaters of the Gunnison River ended in a shallow, flat meadow that appears to be another cirque (glacier origin area) from the recent ice ages. After crossing Cinnamon Pass, where the horizontal rain and fog/clouds made for miserable conditions, we dropped down into Animas Forks, which must have been a bustling mining community at one time. Today, however, it is represented by a few old mines (some for sale) and a USFS toilet.

This is where the road from Lake San Cristobal led. Apparently, these mines produced enough gold and silver to justify the road we followed to California Pass (elevation 12930 feet). There was snow on the ridges and their concave shapes suggests that glacial erosion was a significant factor here.

Note the sharp edges along the ridge, and the tilting of the bedding planes (original horizontal surface upon which the ash flows and lava were deposited); faulting was ubiquitous over the several million years during which middle phase volcanism took place. This was followed by the late phase volcanism associated with the Rio Grande Rift, which was discussed in the Prologue.

This image shows the irregular surface of the San Juan Mts but it cannot prepare you for the 3000 foot descent that lies ahead on the trail to Silverton.

I saw several veins of what looked like K-feldspar as we began our descent, such as this one that had not been explored by miners.

Further on, I noticed this area that had been dug in an exploratory manner but apparently it did not look promising. 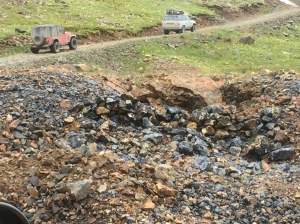 This vein is more promising from an economic geology standpoint because it appears to contain much more quartz, which is associated with the last stage of magmatic fractionation that produces fluids high in elements that don’t fit well into most silicate minerals (e.g. gold, silver, rare earths). 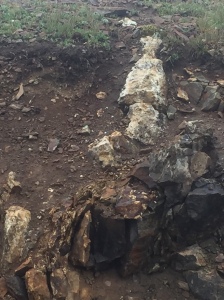 It would appear, however, that none of these veins west of Animas Forks contained economic concentrations of gold and silver. We made our final descent to Silverton via the potentially deadly Corkscrew Gulch trail in the rain, which is why I have no photos of the trail or the rocks. As we approached US-550, the hills were dominated by light-colored talus that did not originate from mines, but from weathering of the volcanic rocks. This could be another example of dense fracture patterns associated with faulting after the original ash flows were deposited.