The last posts showed that geology is everywhere and is going on today. It is easy to see when it occurs at short time spans like the ~12 hour tidal cycle in the Sea of Cortez (see previous post). This post continues this modern trend but adds some older geology too, and mixes water and sand some more in North Florida after I left Arizona and the Basin and Range for adventures east of the Mississippi River. I packed up my stuff into my Jeep and an old military trailer and headed down Interstate 10 for 1891 miles. 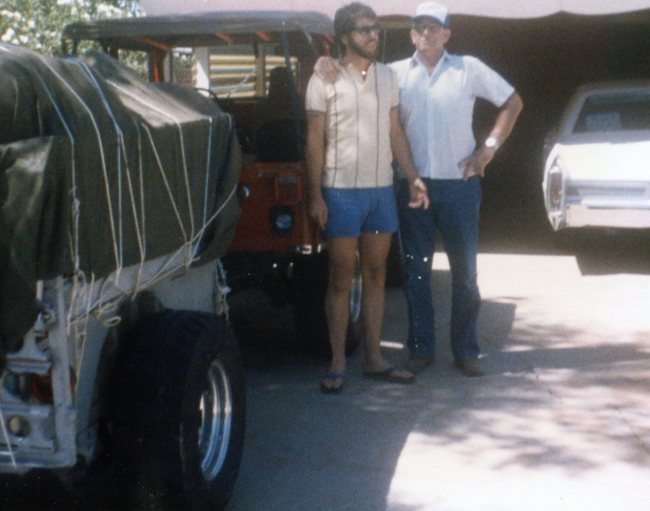 The geology of Florida is more varied than one might think, with visions of sand and sun, because it has a history just like every other place.

The Florida Geologic Survey map (below) shows several units that we will see on this trip. Actually, this post describes several day trips as well as long weekends. 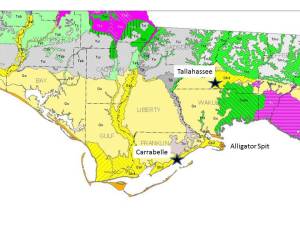 The rocks around Tallahassee consist of undifferentiated Pleistocene/Holocene sediment to the west (Qu on the map) and beach ridge and dune sands to the east (Qbd). The rocks are difficult to date so they are identified by context; these are younger than ~2.6 MA. The ribbon of Qal to the west is alluvium along the Apalachicola River, which is still a major waterway today. The first sediment we expect to see is a beach, right? This is what we get at Alligator Spit, where we are allowed to drive on the beach (speed limit is 10 mph…LOL). 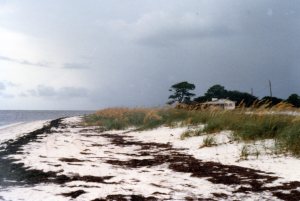 Note how white the sand is. This is the medium sand from the Florida panhandle’s famous beaches. The sand grains are white because they are free of contaminants (e.g. the cement that forms a sandstone from individual grains). No one know how many times they have been on a beach but it has been at least 200 MA since they were part of sandstones in the southern Appalachian Mtns. The individual quartz grains are probably much older, maybe pC like some of the metamorphic rocks we have seen.

The beaches along the east coast are not clean; for example, the famous Daytona Beach is a typical reddish sand… 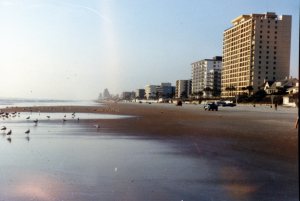 and, yes, you can go off-roading here too! I wonder if this guy is going boating? 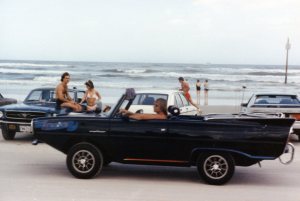 The sand along Florida’s east coast has been transported southward along the U.S. coastline by wave action in what is called the “river of sand“. These processes are also present in the Gulf of Mexico, but hurricanes are also an important geological process along those beaches.

This photo shows a very low energy beach at Carrabelle (see photo above), but it doesn’t look low energy. That seaward bar looks a lot like the bars in the Sea of Cortez but the tidal range here is ~1.5 feet. 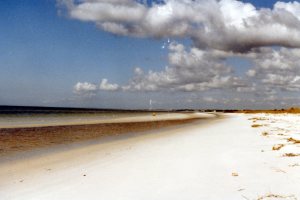 This feature was deposited by Hurricane Kate in November, 1985. It was so strange that I earned an M.S. at Florida State University from studying it (Journal of Coastal Research, 2000). And you can even drive on Carrabelle Beach in January when no LEOs are around! 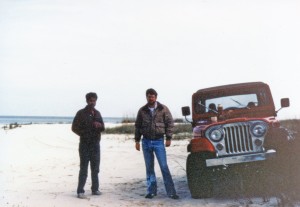 Beaches are a lot of fun and very active, geologically, but this is Florida and nature has other ways of surprising us in the Sunshine State.