The second day, we split into smaller groups; I went with a “blue” group (big tires and lift) and we went to explore the western part of the park. Here is a photo of the groups lining up to depart. 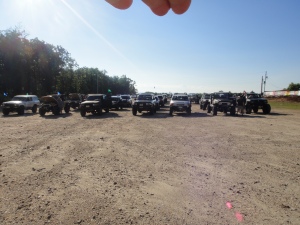 I was busy driving and didn’t get a lot of pictures, but the trails went over a more conglomerate part of the park with broken boulders and sand between. This means we had different traction on each wheel, which is difficult without locking differentials. 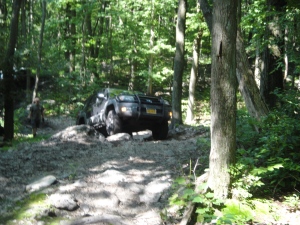 The photo above shows the smaller talus at mixed in with very large boulders as we climb up an old mining trail; however, we leave the trails and just drive over the rocks as best we can. The view from the top is great and worth the effort. 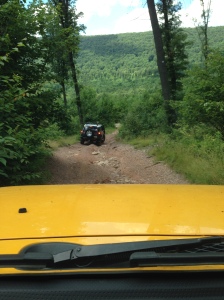 Then we drove down a very steep side of the ridge to a modern creek with real mud (thin) over the rock debris. Water and mud were everywhere, mixed in with boulders to clamber over.

We finished the day with a difficult climb over medium (~2 foot) boulders strewn amongst tree stumps and sand, which was challenging.

I was doing well without locking the rear differential and then….

My steering catastrophically failed (BANG…) and I was dead in the water. Rich and John (pres and vice-pres of the hosting club/ Gotham City Landcruisers) were there within 30 minutes. I was saved by Mark who had an alternator-driven arc welder. He took an hour (he was wheeling on the other side of the park). He welded the busted pieces back together on the trail (side of a mountain) and I was back to camp for dinner.