The next couple of posts are describing trips to northern Mexico between 1979 and 1985. This is a fascinating area where the Colorado River enters the Gulf of California (Sea of Cortez). It also overlaps with the southern extent of the Basin and Range (B&R) province, as evidenced at Rocky Point (Puerto Penasco), Mexico. The western margin of this region is defined by the San Andreas fault zone, which created the Sea of Cortez within the last 7 MA (Pliocene epoch) as Baja moved northward. The overall geological setting is briefly summarized by Eugene Singer. For our offroad interests, I will focus on coastal processes with some description of the southern extension of the B&R.

Subsequent posts will explore the coastline to the NW of Rocky Point. To get to Puerto Penasco, we cross the Sonoran Desert, which has numerous volcanic rocks and volcanoes; this image taken at the international border in 1979, shows some of the mountains in the southern B&R (probably Precambrian basement rocks).

When we arrive at the northern end of the Sea of Cortez, we find a range of geological features formed by the Colorado River, tidal currents, seasonal southerly winds, and alongshore transport at the coast by combined tidal, wind, and wave-forced flow. The image below shows the CO River to the NW and several Metamorphic Core Complexes (MCCs) and other basement rocks that were created as part of the B&R event. The Sierra Madre Occidental is an extensive mountain range to the southeast with elevations of <5000 feet.

Rocky Pt. is an alternate (colloquial American) name for the town of Puerto Penasco. This region has been explored for a variety of minerals, especially evaporates like borates.

The town of El Golfo de Santa Clara is located at the mouth of the CO River. This is also a favorite resort area, which is near a field of large sand dunes at the coast. It will be discussed in the next couple of posts.

This close-up shows Cholla Hill, where thousands of Americans congregate every Easter and enjoy a wide range of water and land activities, including offroading.

The top of Cholla Hill is ~330 feet but it is located directly on the coast. Cholla Hill is an outlier of the B&R with pC granite and metamorphic rocks visible at the top. There is also a breathtaking view of the coast. The first image is looking to the NW towards the CO River. The degree of erosion of this quartz-rich (granite/metamorphic) rock is evident in the sandy ramp that leads almost to its peak, which is a favorite sand racing spot. 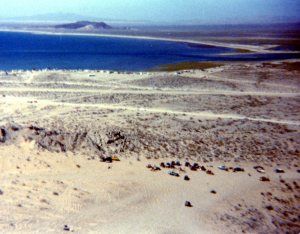 The image below is to the SE, with Puerto Penasco in the distance.

And a short jaunt takes us to the shore, where we can run down the beach in sand or sea… 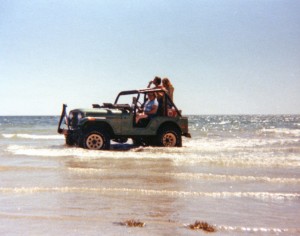 This is a major spot today for U.S. holidays. The beach is very sandy at this location and the tides are not too large. We have a very different story in the next posts.

One response to “Where Rocks Meet the Sea: Mexican Adventures”