Black Hills Cruiser Classic 2013: Getting There

The next couple of posts are describing a trip I made in July 2013 to the Black Hills Cruiser Classic (BHCC). This first post describes the geologic and social settings in getting there, which is ~1500 miles from home.

This post is kept brief by referring to our Family web page for a trip we took in 2010 (timkeen.net), as well as the excellent Roadside Geology of South Dakota (J. P. Gries, Mountain Press Pub., Missoula, MO).

After driving across the coastal plain into Arkansas, I turned west at Hot Springs and drove along the axis of the Ouachita Mtns, which bisect AR. I began the northward trek when I intersected US 71 N and traversed the Arkansas Valley as well as the Ozark Mtns in the north. Paleozoic limestones are nearly horizontal in this area, with erosion being responsible for the steep grades seen in this image in the AR valley province (terrane).

I crossed the Missouri R. at Kansas City and stayed to the east of the Great Plains following the same route we did in 2010. This choice followed the bluffs along the western border of Iowa and stayed close to the river, which allowed me to review my history by visiting a MO stated park dedicated to the Lewis and Clark expedition. I wish I could go up the river in a boat like this reproduction; that would have been cool.

Instead, I continued north and spent the night at one of my favorite American traditions, a small motel in the middle of nowhere. I think I could have driven thru the walls, they were so flimsy–like the sign (does that say Bates Motel?).

The next day I crossed the northern Great Plains on the Pierre Shale. This is a Late Cretaceous (66-90 MA) mostly clay formation that was deposited by the inland sea that covered the entire central US at that time. It has irregular landscape because of glaciation between ~200 and 15 KA. It is just plain flat today, except for the Missouri R. valley (timkeen.net). 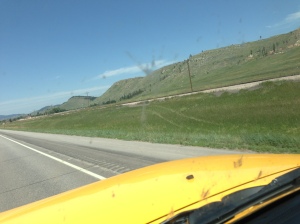 Stream gravel caps small buttes like these, indicating erosion of a younger surface above the current Pierre Shale topography. After Wall, SD, the land climbs because of the doming associated with the Black Hills…