We’re still in Freycinet National Park for this post (Fig. 1), but we’re going to leave the beach at least for today.

The peninsula comprises three granite plutons (Fig. 2), but we’re only going to visit two of them. The Coles Bay Granite (the tan colored area in Fig. 2) and the Hazards Granite (orangish area) are both Devonian but aren’t differentiated on the geologic map I’m using.

The most recent research I found on the origin of I-type granites contradicts most of what I read on the internet. According to Clemens et al (2011), this kind of granite most likely originated from the melting of crustal rocks beneath an island arc, not by fractionation of a mantle source. This means that the simple S (Sedimentary) and I (Igneous) classification of granites is nonsense, although their mineral and chemical composition are certainly different, and reflect different source rocks.

We had a block of granite right outside our room (Fig. 3). It is not in place but probably hasn’t been moved more than a few yards. The hotel is built on granite.

The lower-left part of the boulder is fairly fresh and is very red, which indicates a high percentage of orthoclase feldspar, earning this rock the appellation, Alkali Granite (i.e., large potassium or sodium content in the feldspar). A close-up photo of an unweathered surface (Fig. 4) gives us a sense of the composition. 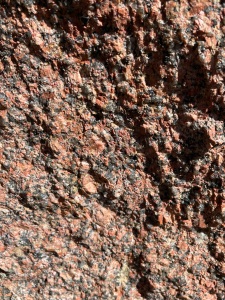 Zooming in a little on Fig. 4 reveals two main minerals: the orange is orthoclase (aka K-spar or potassium feldspar); and a gray mineral which is almost certainly quartz. There are also dark and white minerals in smaller proportions. These are probably albite (Na feldspar) and hornblende (the darker mineral), although there’s certainly biotite (another dark mineral) and some plagioclase (calcium feldspar) in there as well. Overall, I would estimate the composition to be (drum roll): 40% orthoclase; 30% quartz; 20% albite/plagioclase; and 10% hornblende and biotite, plus other minor minerals. According to the QAPF classification, this would be squarely in the alkali granite category.

We drove a short distance to the other side of the peninsula (~2 miles) and had an excellent view of the rocky coastline (Fig. 5), revealing the other plutons. The one in the distance is an island. The road ends a short distance from this point.

This granite is not red, but white in outcrop (Fig. 6).

Looking at it a little closer (Fig. 7; ignore the lichen covering the middle of the photo), we see very little orthoclase, but instead a white mineral that forms crystals. 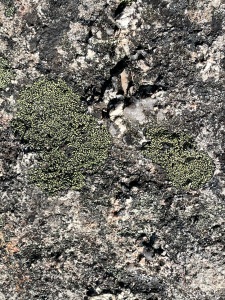 Zooming in (Fig. 8), we can easily identify quartz (the smooth, grayish mineral) and a white mineral that is most certainly either albite (sodium feldspar) or microcline (potassium feldspar), but probably both. 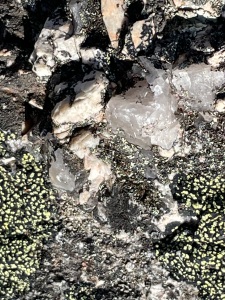 We can estimate the composition of this rock from Fig. 7: 60% albite/microcline; 25% quartz; 10% dark minerals (hornblende and biotite); and ~5% orthoclase and other minor minerals. Turning to the QAFP diagram, we see that this is also an alkali granite, even though it has a different mineralogical composition. The difference in mineralogy between Figs. 4 and 7 supports the description of this granite as strongly fractionated. Because granites typically cool very slowly, they are often fractionated, and produce a continuum of rock types. Most collectible mineral samples come from areas with granite. For example, Fig. 9 shows very well formed crystals of microcline (I think).

Another interesting feature of this exposure is the joint pattern, which has been enlarged by weathering (Fig. 10).

Finally, we find micro joints filled with what appears to be orthoclase (Fig. 11), from its pinkish color.

These thin (<1/4 inch) dikes were oriented in only one direction and were uncommon. I only saw a couple of them. This is interesting because it suggests that the magma had cooled enough to fracture but there was still a highly fractionated magma component available to fill the openings.

The Coles Bay Granite was emplaced into crustal rocks about 350 My ago, at the same time as Australia/Tasmania were becoming solidly connected to Gondwana. The composition of this plutonic rock suggests that it was formed from the melted remains of an island arc (like Japan today) that had previously slid beneath the Australian Craton. The magma took hundreds of thousands of years to cool into solid rock, starting from the top of the magma chamber, where the molten rock was in contact with cooler rocks. Thus, the granite from Figs. 6-11 cooled first and became solid enough to fracture, allowing the still molten magma from lower in the chamber to fill the cracks (Fig. 11). Finally this magma solidified as well to form the rock seen in Figs. 3 and 4. At least, that’s what I think happened.